TAVASCAN PEAK OF THE FORN COMA
FROM THE PLETA OF PRAT

Tavascan, We discover the peak of Coma del Forn, a perfect viewpoint of the High Pyrenees at the head of the Cardós valley.
A linear route of 6.8 km in length (outward and return) and an accumulated positive difference in altitude of 965m that takes us to the summit of Coma del Forn (2,685m) from the Pleta del Prat refuge. We start the route from the ski resort of Tavascan, we go up the Mascarida torrent passing the Pleta de Gavàs and arriving at the Mascarida and Diablo lakes. We continue ascending surrounding the Mascarida de Dalt lakes and flanking the southern slope of the mountain. We reach the crest of the Coma del Forn peak and crown the summit. Descend along the same path.
At the northern end of the High Pyrenees Natural Park, between the Tavascan valley and the Gola valley, we find the pyramidal peak of Coma del Forn (2,685m). Its ascent on skis or snowshoes is a classic route and very popular with winter mountain lovers. In any case, no matter when we do the route, even in summer, we are sure to enjoy sensational views in all directions thanks to the privileged and relatively isolated location of this magnificent mountain.
THE BEST OF THE ROUTE
- The fabulous views we have from the peak of Coma del Forn and throughout the climb as we gain altitude.
- Discovering the lakes of Mascarida, Diablo and Mascarida de Dalt, all of glacial origin.
- The livestock farming tradition of the High Pyrenees, with the Pleta de Gavàs farms and the legend of the Devil's Lake.
Read more Read less
ROUTE DESCRIPTION
File Download links
Difficulty: High
Departure/arrival: Tavascan ski station
Total time: 5:35h
Minimum altitude: 1720
Maximum altitude: 2685m
Accumulated slope: 965m
Total distance: 6.8km
Nearest town: Tavascan
Accumulated slope: 965m
download route

- Duration: Full day.
- Total effective time (without stops): 5:35h in total: 3:05h from the Pleta del Prat hut to the Coma del Forn peak and 2:30h to return from the peak to the hut by the same route.
- Accumulated difference in altitude: 965m
- Difficulty: High.
- Season: All year round. In winter conditions it is necessary to do the route with snowshoes or mountain skis.
- Equipment: In winter conditions: snowshoes or mountain skis, ice axe, crampons, DVA, shovel and probe.
- Cartography: Pica d'Estats - Mont-roig. Vallferrera - Vall de Cardós. Scale 1:25.000. Editorial Alpina.
- Observations: In winter conditions: it is essential to consult the avalanche risk forecast bulletin before doing the route. The first stretch up to the plain of Meli can also be done on the other side of the ravine (on the side of the slopes), in winter this option is safer.
- How to get there by car:
From Sort take the C-13 road north to Llavorsí. In this village we leave the C-13 and turn right onto the L-504/C-381 road towards Tírvia. Continue along this road and you will soon reach a roundabout where you take the north exit towards Ribera de Cardós, Lladorre and Tavascan. Continue along the L-504 road to Tavascan. Leave the village behind and continue uphill. We pass the Bordes de Graus and the Bordes de Quanca and continue along the road to the end, where we find the Tavascan ski resort and the Pleta del Prat refuge, the starting point of our route.
STEP BY STEP TOUR

From the Pleta del Prat refuge (0:00 - 1,720m) we begin to walk following the indications of the Mascarida itinerary proposed by the Alto Pirineo Natural Park. We advance along a track that soon leads to a path. We are going up the Mascarida torrent along its hydrographic left bank. Let's take a look at the ski lifts of the ski station and some precious specimens of black pine and spruce. We leave behind a detour to the left (0:15 - 1,764m) that we do not take and that would take us to the path that goes up to the Corbiu viewpoint.

The climb is continuous and demanding, we decidedly gain height without respite. We leave the subalpine zone and enter the alpine zone, now without forest. After the 1950m elevation we move away from the ski lift of the station. We leave behind a detour (1:05h - 2,036m) that would take us back to the Pleta del Prat refuge along the path to the Meli plain and the ski slopes, and we tackle a stretch up the Mascarida stream in a NW direction. Or that takes us to the Pleta de Gavàs (1:25h - 2,184m), a plateau with several half-ruined huts, witnesses of the Tavascan Valley's cattle-raising past. We continue up, leaving behind the snow pole that is in the middle of the stream. Next, we tackle the steepest and toughest section of the route.

We continue following the Mascarida stream until its source, Lake Mascarida (1:50 - 2,346m). Next to this lake, to the west and half hidden, is Devil's Lake, also of glacial origin, like Mascarida Lake, and quite difficult to identify in winter because a lot of snow accumulates and it is quite small. It is probable that in the past the Devil's Lake and the Mascarida Lake formed a single lake, but the phenomenon of filling (accumulation of sediments that ends up blocking the water of the lake) ended up separating them.

THE LEGEND OF THE DEVIL'S LAKE

It is said that the Devil's Lake is the most diabolical of the lakes in the Pyrenees because, according to legend, it is a door to hell through which the devil himself came out... It is seen that one day, a herd that grazed in the area was very upset and the shepherd who took care of him complained: "So the devil would come out and tie them all up!". Next, a well-endowed black ram came out of the lake, tied up all the sheep one by one, and disappeared back into the waters of the lake. After 5 months all the ewes gave birth to black lambs. The following summer, one day they were grazing in the area, the black ram reappeared making some very loud bleats and all the lambs ran after their father towards the waters of the lake and disappeared forever.

We continue the ascent. We climb a smoother blade that takes us to the Mascarida de Dalt lakes (2:20 - 2,437m), framed in a small glacial cirque crowned by the Montforcado summit. From the lakes we trace a loop that places us on the S-SE buttress of the Coma del Forn peak and we make the last section of the ascent along the wide ridge that takes us to the Coma del Forn peak (3:05 - 2,685m). The views are exceptional! Towards the east we can see the Pica d'Estats (3,143m) with its neighbors, the Punta Gabarró (3,115m) and the Verdaguer peak (3,129m). To the north, we see the crest of the Coma del Forn peak that connects with the Tres Estanys pass, the Tres Estanys peak (2,755m) and Ventolau (2,851m). Towards noon we make out the Sierra de Cadius and the long ridge that begins at El Campirme (2,633m) and ends at Llavorsí.

After enjoying the views for a while and regaining strength, we descend along the same path that we climbed, passing by the Mascarida de Dalt lakes, the Devil's lake, the Mascarida lake and the Mascarida stream. We thus return to the Pleta del Prat refuge (5:35 - 1,720m) where we end this fantastic day in the high mountains. 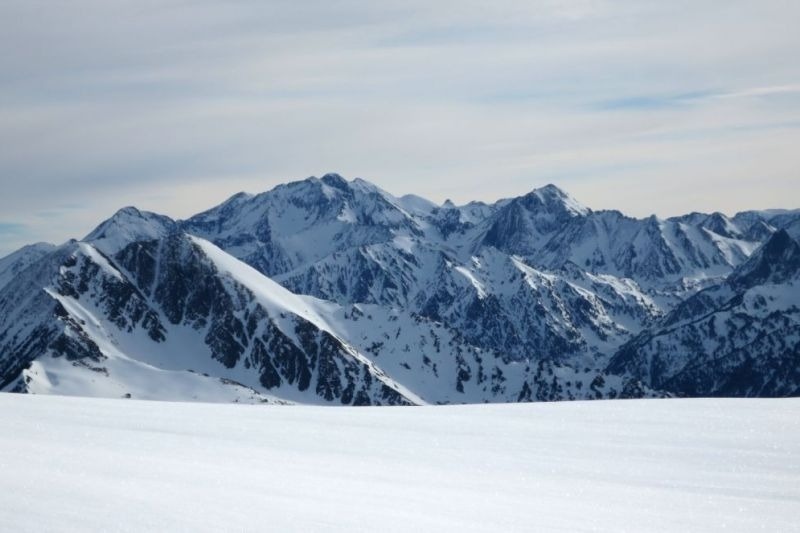 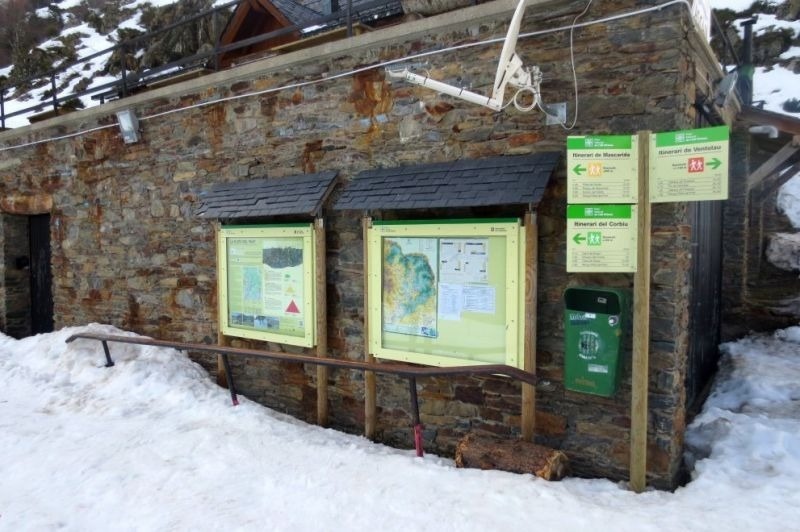 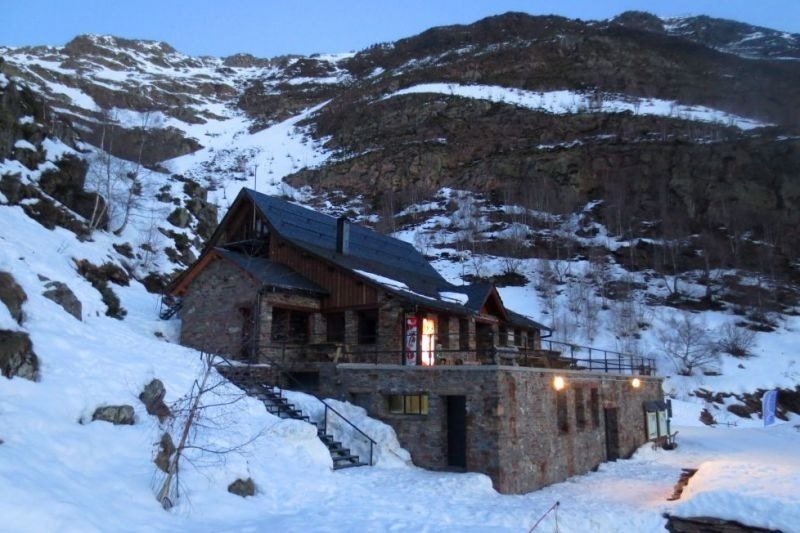 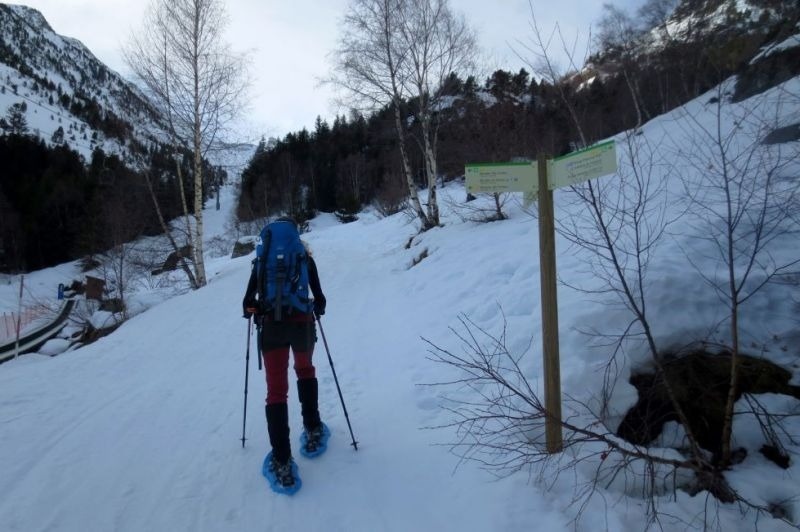 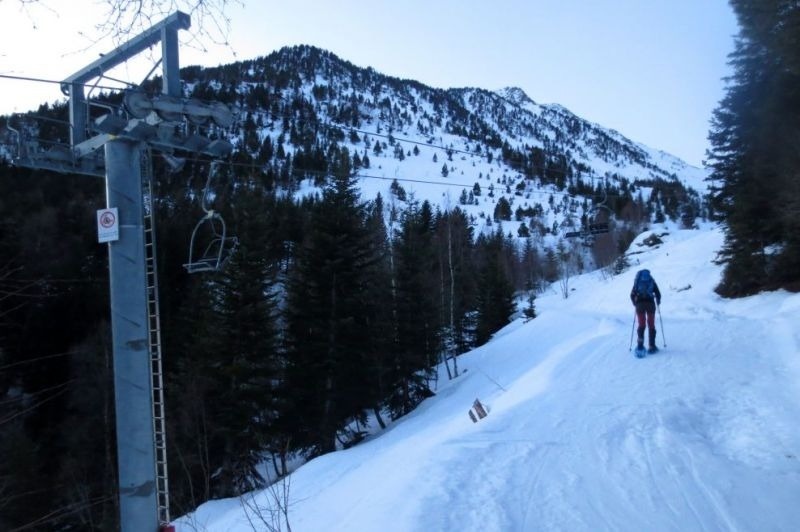 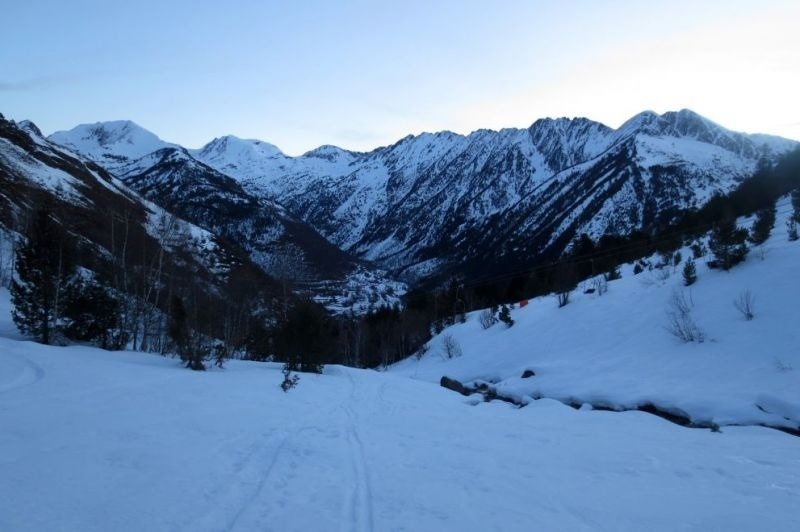 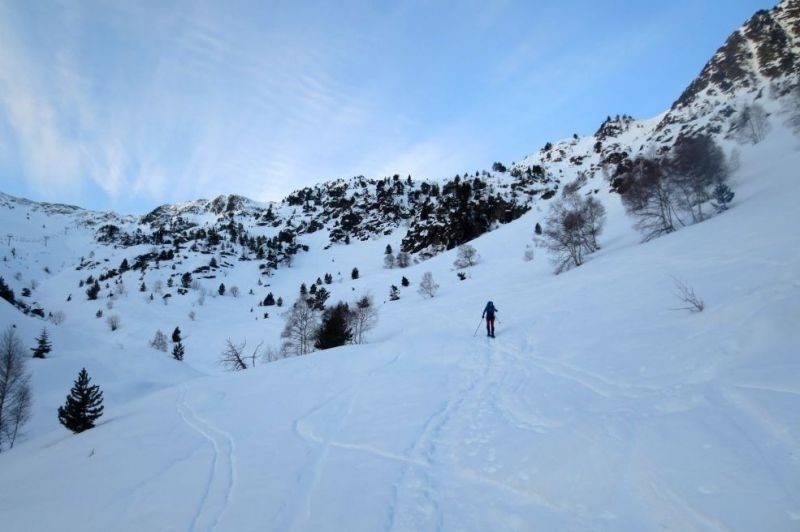 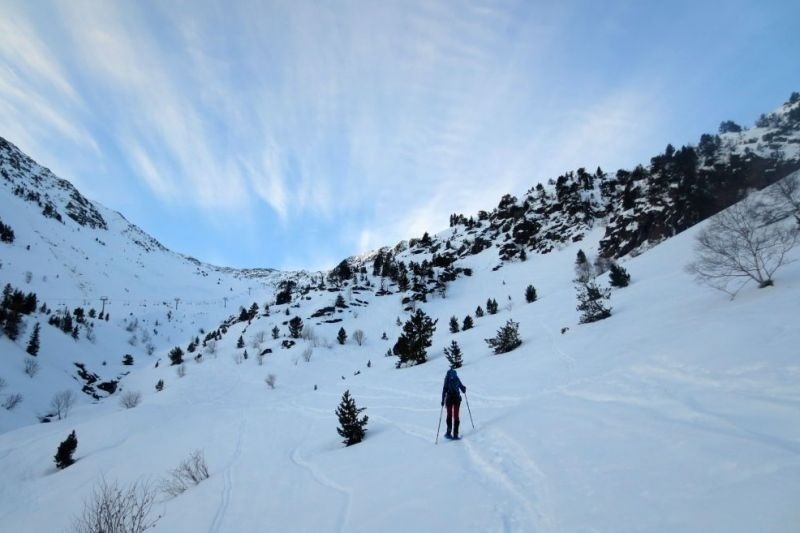 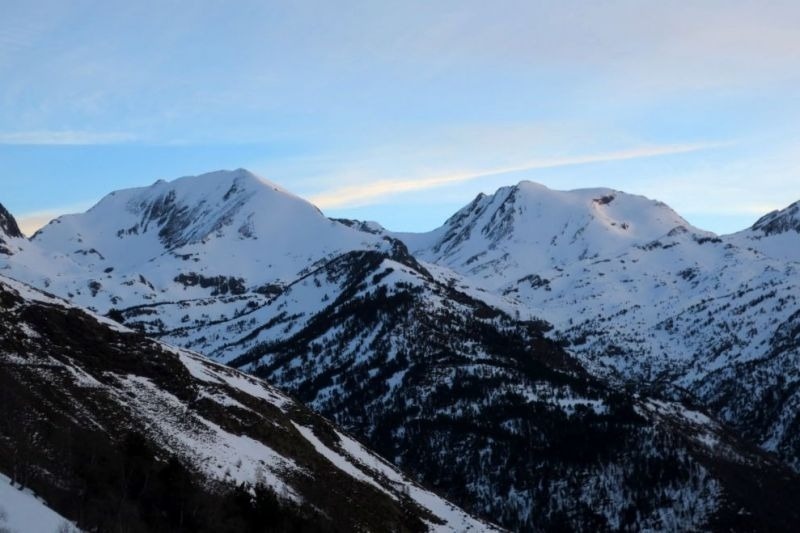 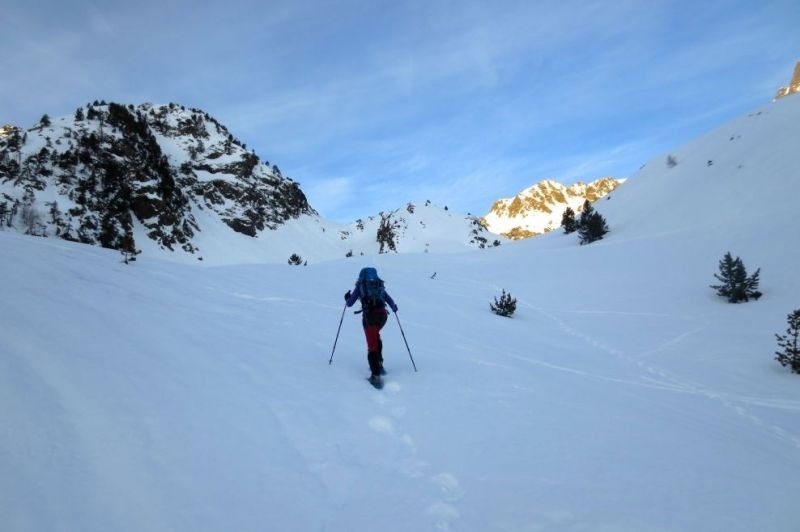 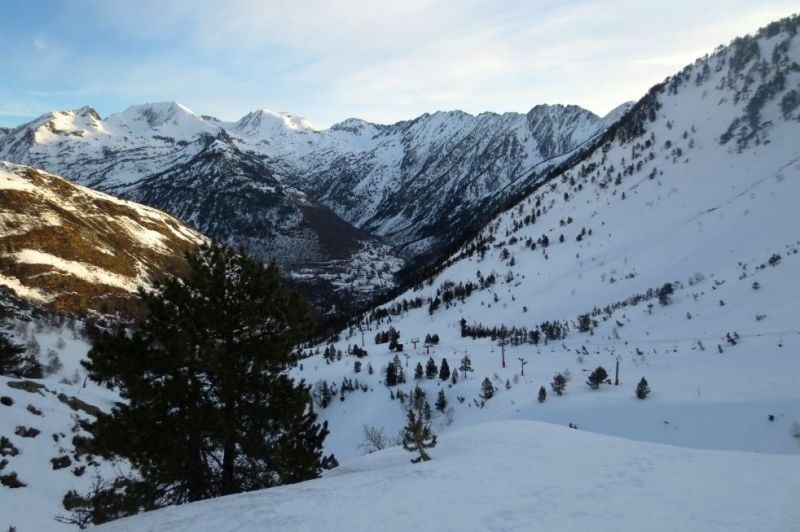 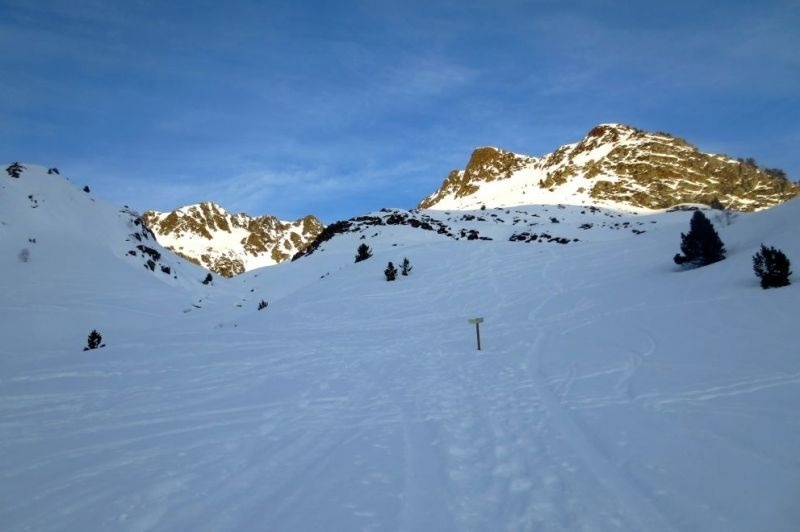 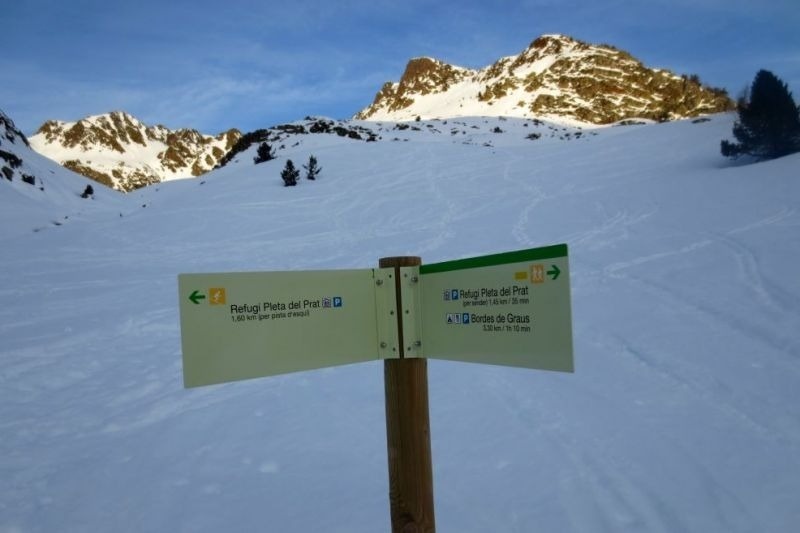 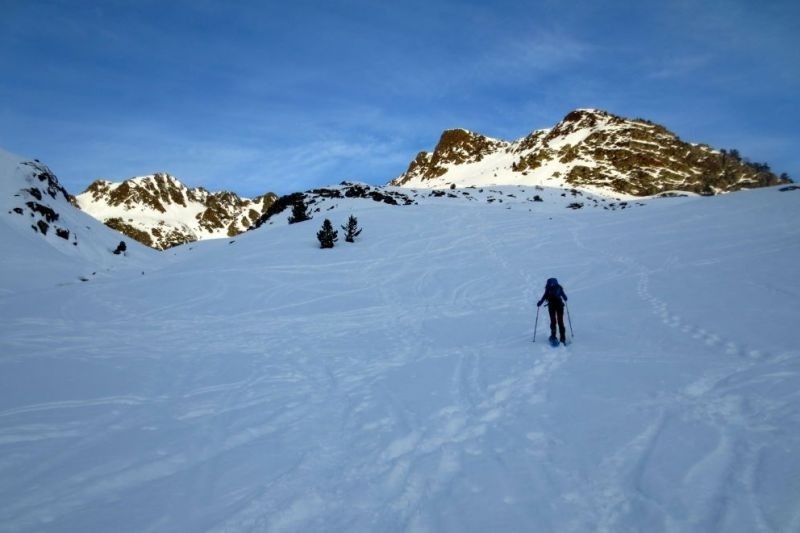 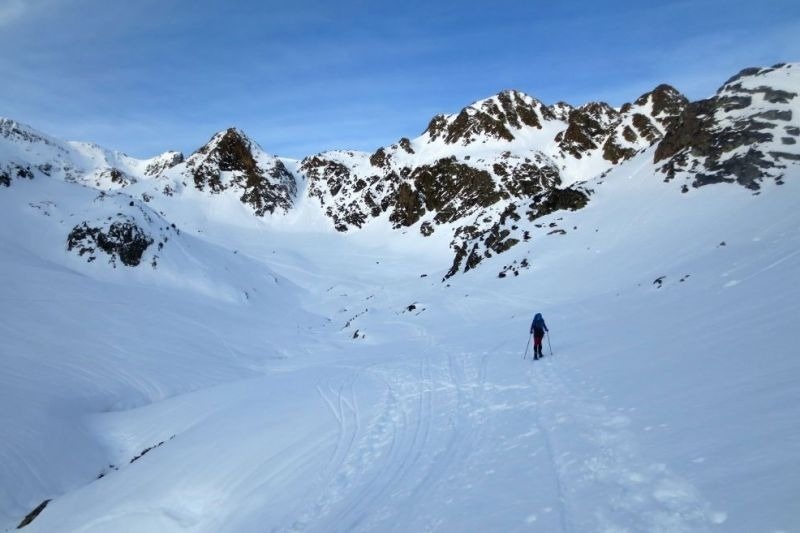 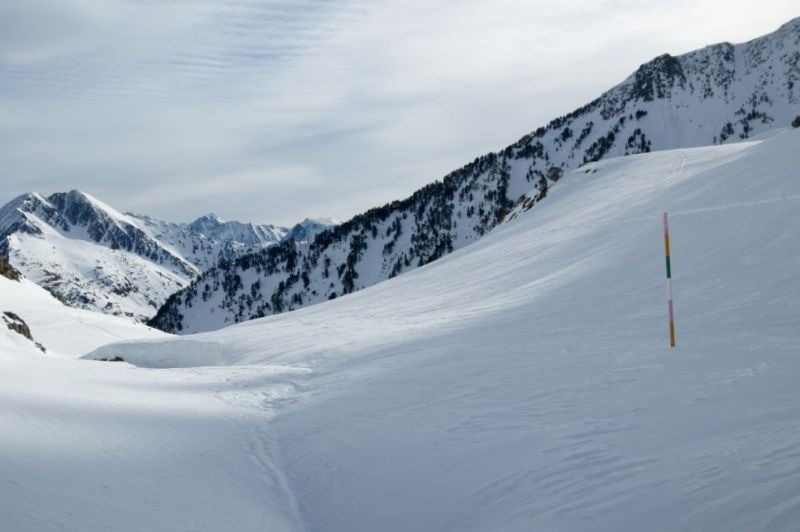 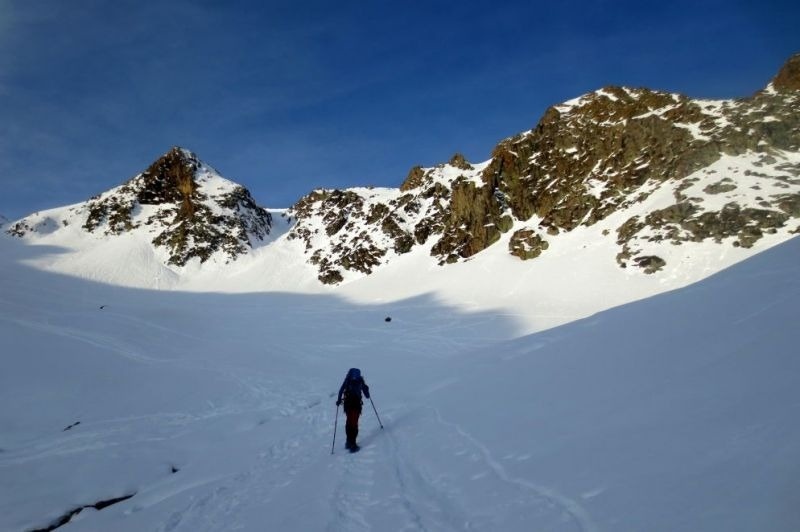 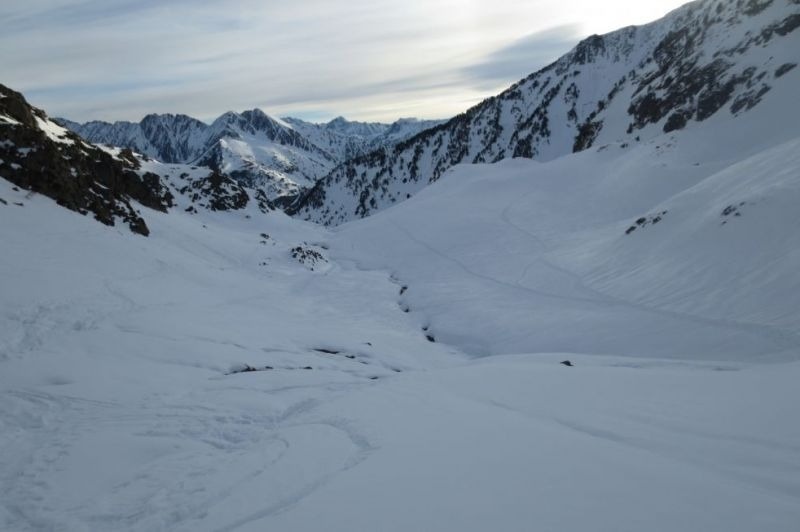 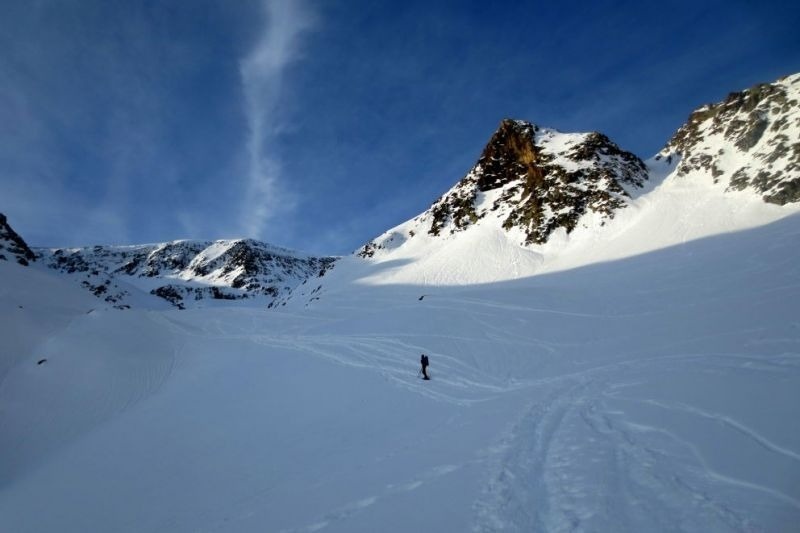 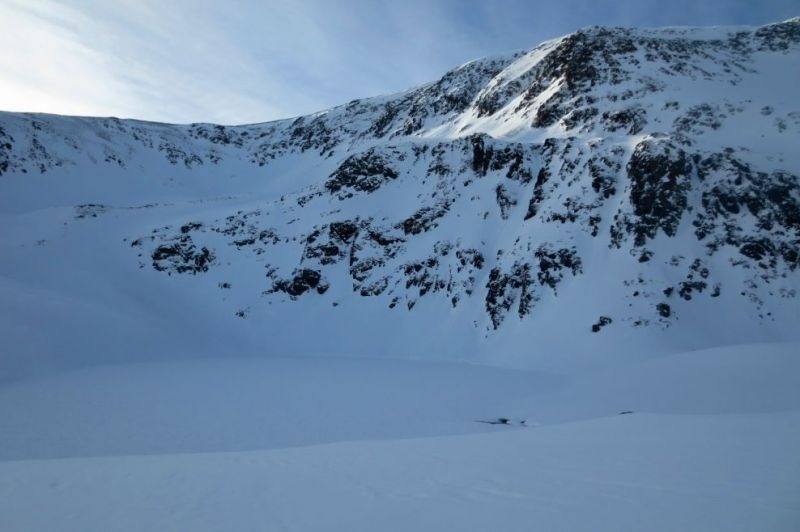 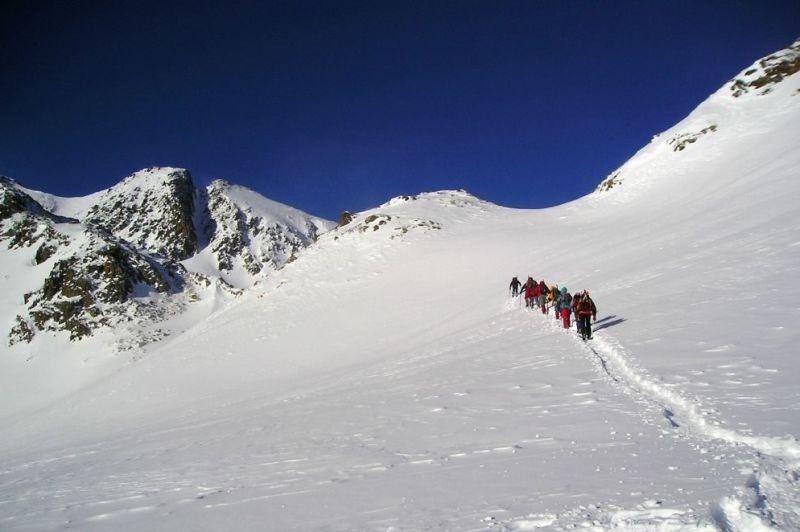 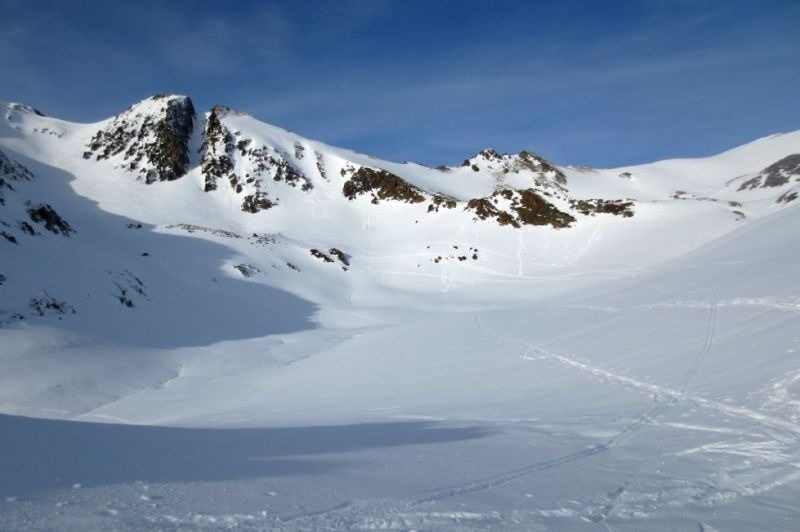 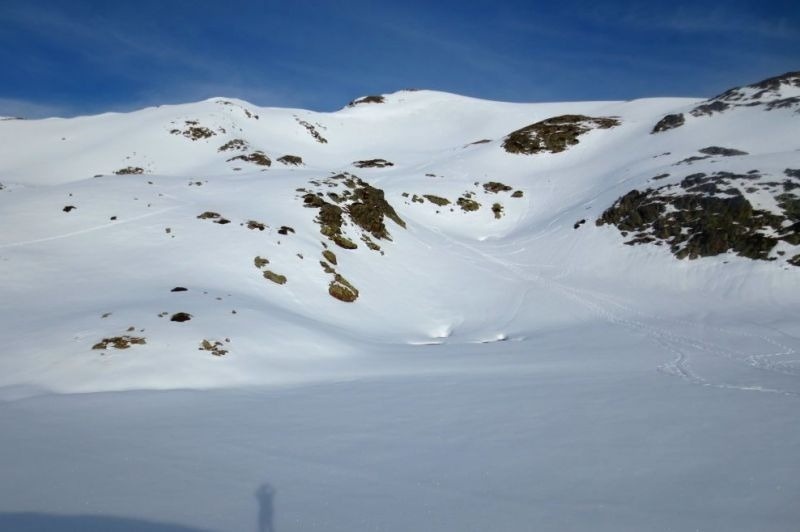 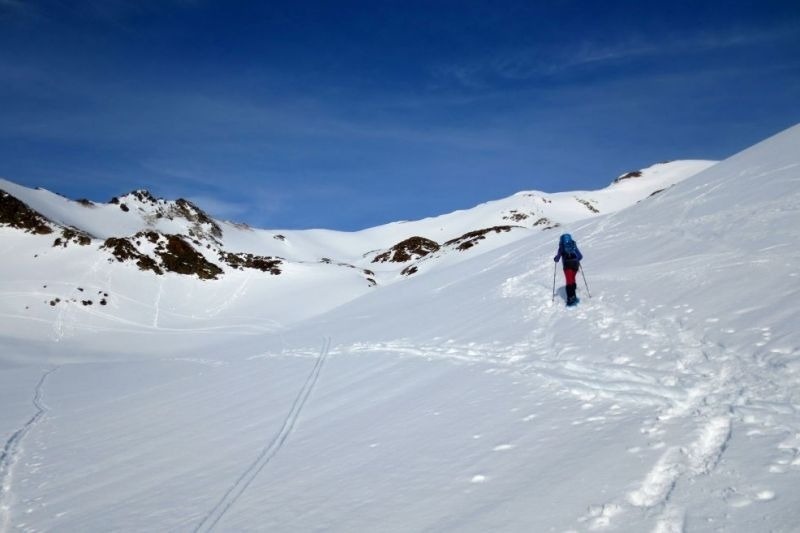 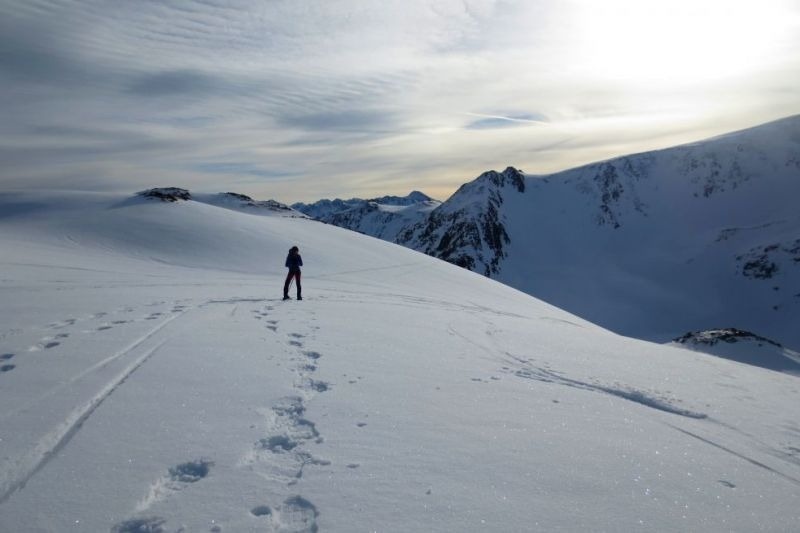 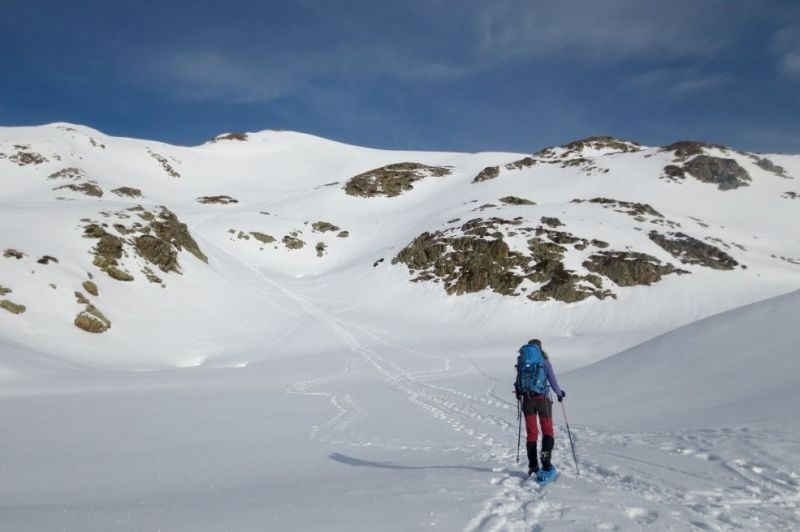 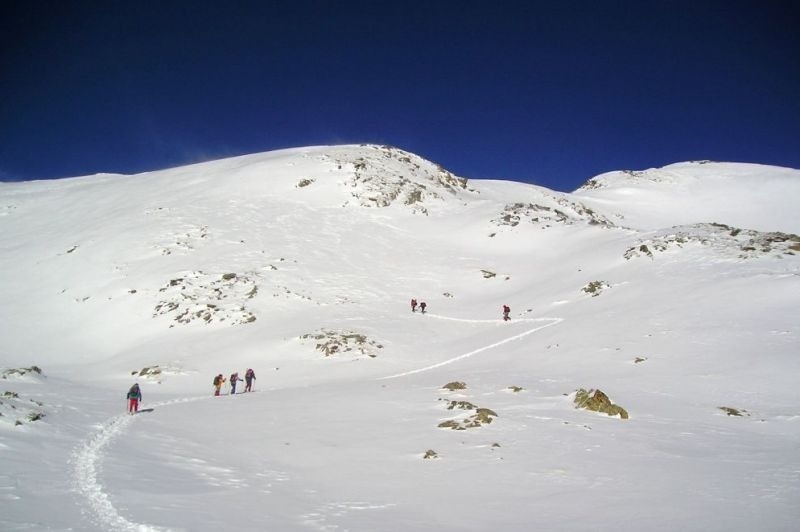 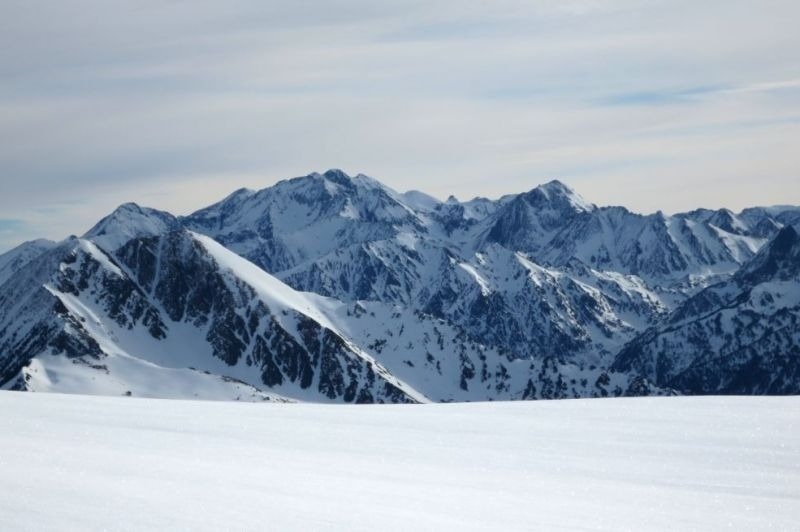